For your holiday (or anytime) viewing: the comedy special "AD/BC: a Rock Opera"

The guiding principal of the Funhouse for the past two decades has been: if I find something amazing, I've got to share it. Thus, as my Xmas present to readers of this blog (and for whatever reading you do here, I thank ye kindly), I want to spotlight a brilliant creation courtesy of some of the shining lights of British TV comedy.

The program is AD/BC: a Rock Opera (2004), and it's an absolutely spot-on parody of the rock operas of the early Seventies. It's the story of the Nativity, as told by rock composer “Tim Wynde,” played by the great Matt Berry. Berry and Richard Ayoade wrote the music and lyrics, and Ayoade directed. For their pedigree, I merely have to note that both were in the supporting cast of The Mighty Boosh and later were stars of The IT Crowd. Ayoade recently directed the critically lauded Submarine, and Berry is currently starring in the great sitcom Toast of London. 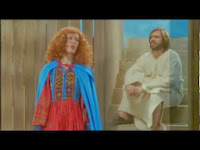 Berry has made a habit of playing hammy, pretentious characters, and that serves him well here as the Lloyd Webber-like composer who also plays the innkeeper. The show is not only a letter-perfect parody of the corny “hipness” of the rock operas, but Ayoade has also wonderfully captured the visual tropes that appeared in the film versions of these works (there are wonderful recreations of the camera language and edits from Jewison's JC Superstar and David Greene's Godspell catalog of would-be “cool” effects).

[Full disclosure: As a student at Catholic school I was forced to memorize songs from Godspell, so I felt tormented by that show; I actually do enjoy the wildly-dated-even-when-it-was-new excesses of JC Superstar, but take great delight in the precision with which the tenets of both shows are gutted here.]

The cast is simply sublime: Berry as the innkeeper, Julia Davis (Hunderby, Nighty Night, Jam) as his wife, Julian Barratt (of the Boosh) as the villainous “Tony Iscariot,” Ayoade as Joseph, Matt Lucas (Little Britain) as God, and, among the chorus, Noel Fielding and Rich Fulcher of the “Boosh” and Graham Linehan (creator of Father Ted and IT Crowd).

It is fun, it is super satire, and it is incredibly silly. What more can you ask for in comic entertainment?

Posted by Media Funhouse at 5:22 PM