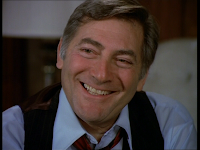 Summer is over, fall is here, and now I finally have the time to catch up to the show-business deaths that have racked up in the last few weeks. I take pride in saluting the folks that the mainstream media either notices for a few short minutes when they depart, or ignores entirely. These are individuals whose faces, voices, and talents have been burnt into our brain from hours of watching TV and listening to the radio (when that medium had a central place in American life). Their names are forgotten, but their contributions stick around for quite some time.

I paid tribute to Phil Bruns some weeks back, and one of his Mary Hartman castmates, another veteran character actor, died in the early part of the summer. Norman Alden had a half-century career on TV and in the movies, and was literally everywhere in the Sixties and Seventies.

After serving as a soldier in WWII, Alden came home and attended college on the GI Bill. He studied theater in school, and shortly thereafter began his long career as a character person (a noble profession indeed). The list of his TV credits spans the Sixties in every direction: Richard Diamond, The Untouchables, Honey West, both Kildare and Casey, Batman, The Andy Griffith Show, The Big Valley, My Three Sons, Hogan's Heroes, Mission: Impossible, and The Mod Squad.

The best notices he received for a movie role were for his starring turn in Richard C. Sarafian's Andy (1965), which I have never seen. He also played a very old-looking high school student in The Nutty Professor and had a small role in Jerry's The Patsy as well. One of his later prominent roles was in I Never Promised You a Rose Garden (the title of which will be evoked in a later blog entry).

BUT he is best known by TV and movie buffs of a certain age for three roles:

— As Frank Heflin, the scientist friend of “ElectraWoman and DynaGirl” on The Krofft Supershow in 1976. This show seemed to have been on for a few years, but true to the Krofft tradition, there were actually only 16 “ElectraWoman” segments made in that one season, no more. Here is a sample episode where the ladies take on a villain named “Glitter Rock”:

Alden also impressed as the roller derby teammate of Raquel Welch who goes insane in the rink in Kansas City Bomber. I couldn't find his freak-out scene, but he can be briefly seen in the film's trailer:

Although he appeared in countless movies, TV shows, and commercials, Alden is best remembered by many TV fans for his memorable death scene on Mary Hartman, Mary Hartman. The full scene is here, and it is quite as wonderfully dippy as I remembered.

Posted by Media Funhouse at 8:39 PM

Thank you for paying tribute to my father, Norman Alden. He was a wonderful actor and entertainer. He would have been very proud to see all the wonderful comments and articles that so many of you have honored him with. He truly loved performing and being an actor. Something else many people did not know about my father is that he was a huge Ramones fan. Additionally, he and Casey Kasem worked on the early animated series, the Superfriends in the Seventies. My dad was the original voice of Aquaman, a role he was always very proud of. You have a wonderful blog. I hope you will continue to recognize the work of older actors and character actors who have provided audiences with so many years of entertainment yet sometimes get forgotten once they have passed a certain shelf life.
Thank you,

Thanks much, Ashley! Already loved your dad's work as an actor, but the fact that he was a Ramones fan makes him all the cooler in my book.

I'm very happy to pay tribute to character actors and actresses on this blog. They're an integral part of all our memories, and their faces and performances will last far longer than a lot of the "A listers" whose films date very badly.

I saw Andy many years ago. Great movie, but unfortunately not available on DVD. Ashley you should be proud of your dad as he was a fine actor.