Many, many folks of note whose work I’ve loved have been kicking off lately. I hope to offer lengthier looks at three of them in the week(s) to come, but wanted to first offer a round-up of four who most certainly deserve a farewell salute (including the guy to the right).
For instance… the character actor best known for his appearances in the three Beatles live-action fiction films. Victor Spinetti was a Welshman who appeared in numerous stage productions and films that played internationally, including a trio starring his countryman Richard Burton (Becket, The Taming of the Shrew, and Under Milk Wood).
I remember him fondly as a stammering critic who “blames Fellini!!!” in Anthony Newley’s startling ego-fest Can Heironymus Merkin Ever Forget Mercy Humppe and Find True Happiness? (1969), as well as (yeah) his three turns with the Beatles. The oft-repeated story is that Lennon and Harrison visited him backstage when he was starring in the London production of Oh, What a Lovely War. They wanted him for “every one" of their films, because, George claimed, his mother wouldn’t go to see their films without Spinetti (whom “she fancied”).
Whatever the reason was, Spinetti was a seasoned character actor who incarnated nervous bureaucrats and nasty authority figures, as in his wonderfully oddball turn in Magical Mystery Tour:
Spinetti was a “guest” voice on one of the Beatles’ most ambitious Xmas singles (the ’67 one), “Christmas Time Is Here Again,” and also continued his Beatle connection into the music-video era, providing a cameo appearance with the great Roy Kinnear (another Beatle-connected actor) in the Mike and the Mechanics video for “All I Need is a Miracle.”
Beatlemaniacs are extremely good about sharing, and so it’s possible to watch Spinetti speaking about the Fabs on YouTube:
But the single best, rarest piece of footage I discovered on that hub site is a 1968 interview with Lennon and Spinetti when the play version of In His Own Write opened at the Old Vic. Spinetti wrote and directed the play and is quite eloquent about what made John’s writing special. For his part, Lennon talks about the influences on his writing (Lewis Carroll and Ronald Searle) and who he was compared to, but hadn’t read (James Joyce):
******* 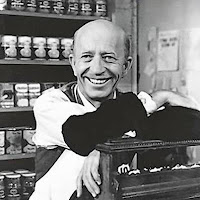 Moving to another character actor who made a great impression — in this case by being a sane person in the land of the insane — sitcom fixture Frank Cady died at the age of 96 two weeks back. Cady was of course “Sam Drucker,” the owner of the general store that served as the linchpin for the Paul Henning “universe” — it served as a backdrop for action on both Green Acres and Petticoat Junction, and was the place the Beverly Hillbillies came back to when they made visits “home.”
Cady had a hell of a resume as a bit actor, showing up in various noirs (DOA, The Asphalt Jungle, Ace in the Hole) and other Fifties classics (Rear Window, The Bad Seed), but he will forever be remembered as being the mellow and uncommonly sensible Drucker character. Here’s an interview he did where he discusses how he failed the audition for the role of “Otis the Town Drunk” on The Andy Griffith Show, but was lucky enough to lose that part and get the Petticoat Junction role a few years later.
****** 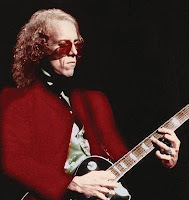 Moving on to music — and yes, a LOT of memorable folk in the world of music have been dying lately — I salute Bob Welch, who was a member for four years in the “interim” version of Fleetwood Mac. FM did have at least one minor hit, “Hypnotized” during his time (1971-74) in the band, but it was when he left and was replaced by the “Buckingham Nicks” duo that they went through the ceiling.
Obits reported that Welch had had spinal surgery and was depressed about the fact that it did not go well; he died of a “self-inflicted gunshot wound.” Another, lesser, depressing fact in his obits was that Welch was one of the only important members of Fleetwood Mac who was not honored when the band was inducted into the Rock and Roll Hall of Fame — he had sued the band for royalties from the albums that he had participated in, so that was most likely the cause for him being left out.
His contribution to keeping the outfit afloat was seminal, in that they were between their British-blues-band and hot-singles-act personas when he was the lead guitarist. Reportedly he did make amends with Mick Fleetwood after the lawsuit (and R’n’RHOF snub). Fleetwood and Christine McVie had indeed worked on Welch’s most memorable effort (in my view), his first solo LP French Kiss, which had both his biggest hit, "Sentimental Lady" (a reworked song from his FM years), and this super-catchy number on it. What a blissfully cheesy “publicity film”!
***** 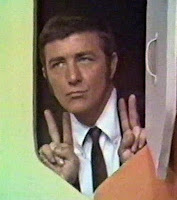 One of the most notable TV-related deaths in recent weeks was that of Richard Dawson. Best known as a gameshow host, he also proved himself a capable comedian on both British and American series (including Laugh-In) and brought a note of class to whatever show he appeared on. Dawson first came on the show-biz radar as the comedian husband of sex kitten Diana Dors. The two even hosted a TV show together in England (she was always the main draw):
His first notable appearance on U.S. TV was on the terrific Dick Van Dyke Show. This clip is out of synch, but it shows Dawson doing what must’ve been his act at the time:
He did indeed come over to America as a representative of “swinging London,” but made a name for himself as the character Newkirk on Hogan’s Heroes. The film Autofocus suggests that Bob Crane was jealous of Dawson (perhaps for being effortlessly classy?). Dawson also appeared in a few movies (most notable the Ah-nold-starring Stephen King adaptation The Running Man). Here he is in a goofy 1966 picture called Out of Sight:
Further cementing his cool Sixties image is this Dating Game appearance, where he was “Bachelor No. 1.” Bachelor No. 3 is none other than Bill Bixby, and both gents are dressed to the nines in swinging-guy Sixties wear:
I’ve written and talked on the Funhouse TV show about the celebrities who didn’t care about playing the game shows they were on (my faves being Henry Morgan, his hero Fred Allen, and Ernie Kovacs). Dawson really cared about the games, but mostly so that he wouldn’t be “robbing” the contestants in going for a joke answer. Here he is debating over an answer on the show he lent a major dose of class (and the stray W.C. Fields impersonation) to, Match Game:
Dawson’s longest-running stint in show biz was as the host of Family Feud. Much has been made of his kissing the female contestants — he often defended himself by saying he did it “to wish them luck” as his mother had done with him as a kid (this begs the question of why he did it when the contestants were *leaving* the show, too — if you can get away with it, do it!). He rarely if ever cracked, but occasionally the insanely stupid answers a contestant gave would make him laugh:
One of the reasons I think Dawson was so perfect as a gameshow host was that, affectations to the side, he did come across as a genuinely decent guy who really liked the schlubs who were playing these games. This is reflected in two speeches he made on Family Feud. Firstly his goodbye speech for the original run of FF was a nicely delivered salute to those who’d helped keep the show on the air.
The most genuinely wonderful moment of Dawson’s TV career, though, never aired on the show. There was an additional speech he made to the studio answers of FF on the final show that was thankfully taped (but, again, was not included in the broadcast version of the show — they had to leave in more dumb answers!).
Part of Dawson’s personal mythology (that he never personally promoted) was how he was “dumped’ by the screen goddess Diana Dors, and was left alone to raise their two sons. I know nothing of the real Dawson, but this bit of video indicates that he was a genuinely warm guy; the fact that he came back out and delivered this speech knowing it wouldn’t get on the air separates it from all of the “telethon moments” in which someone broke down crying over a handicapped child. His urging people to do what they call in the theology biz “good works” seems positively real and not “for the camera”:
When Dawson retired from TV, he really retired. He did, however, consent to do a long interview for the “Archive of American Television” people, in which he discussed his television career. Here he talks about the infamous “kissing controversy” on FF:
In closing I’ll turn once again to a musical oddity (I do so love novelty tunes). I had no idea that Dawson released records in the Sixties (but was not surprised upon finding it out). He spoke-sang a tune (in the Burton-Harrison mold) for a “Hogan Heroes sing” album, but also released a single in 1967. The A-side, “Children’s Parade,” is pretty awful, but the piece de resistance is the extremely odd B-side. Titled “Apples and Oranges” (having nothing to do with the Syd Barrett/Pink Floyd tune of the same name), it is a another oddly maudlin piece that has an amazing last line. And I do mean amazing:

Posted by Media Funhouse at 3:51 PM