Surely, Dennis Potter would be smiling…. 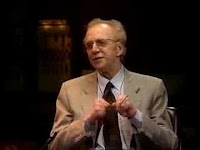 As I’ve been watching the developments in the Murdoch phone-hacking scandal grow in severity — from “merely” hacking the phones of celebs to those of politicians and murder victims — and have seen Rupert and his son James be called on the carpet by Parliament, I’ve been thinking a lot about Dennis Potter.

Now surely this “unraveling” won’t really harm Murdoch financially, since capitalist moguls are made of Teflon and never truly suffer for the crimes that were committed in their name. Yes, his responsibilities as the head of a dynasty of uncommonly sleazy “journalistic” enterprises is finally coming into question, but no doubt News Corp will continue on, with the old man perhaps retiring and putting one of his kids in charge. If the shit really hits the fan, an outsider (read: someone not named Murdoch) will take over and the sleaze will continue. The same business under a new name.

However, for the time being we can indeed take some small comfort in the fact that what everyone pretty much suspected is true: that Murdoch can, without blinking, simultaneously state that he is a “hands-on” mogul, and yet he knows nothing about the illegal activities carried on at the newspapers he so prizes. 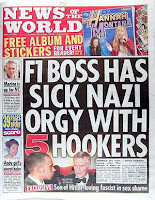 There have been several media commentators who have spoken about the nature of Murdoch as both an omnivorous acquirer and despoiler of media, including Bill Moyers. However, I want to point you to the words of the exceptionally talented writer of brilliant teleplays, Mr. Dennis Potter.

Potter was the best British television writer ever and was certainly one of the world’s best as well. His creations were emotional, cerebral, and trailblazing — just look at how many people, including talents like Alain Resnais and Woody Allen, have made use of the “fantasy musical” construct that Potter pioneered in Pennies From Heaven.

When you reflect upon the contributions of the two men, perhaps the only entertaining thing that Murdoch has been involved with was the fashioning of the catchiest and sleaziest headlines ever (as with The New York Post’s memorable “Headlesss Man in Topless Bar”). He wasn't creatively involved with this at all, though — he was just the "wallet" behind the news.

What Potter created, on the other hand, are some of the finest television programs EVER. Full stop, no arguing about it. His work has a resonance for me and the millions of others who’ve seen it because he reflected upon both the darkest and the most hopeful parts of the mind and heart. This can be seen to best advantage in this scene from Pennies From Heaven, in which he uses for the first time the song that became a kind of signature piece for his “memory” plays, “The Clouds Will Soon Roll By.” Potter’s gift lives on long after his departure:

And yes, he despised Murdoch, and here is the clip I’ve been thinking about all week:

The gent who put this up at the Handwritten Theatre blogspot, notes that Dennis left us in 1994, and Murdoch is still prospering. But whose name will live on longer? I don’t think I even need to answer that. Just watch the plays.

“The song is over, but the melody lingers on.”
Posted by Media Funhouse at 10:58 PM