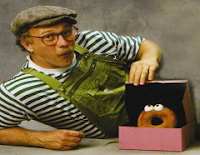 Each year at Easter I celebrate the Paschal season by presenting Christian kitsch on the Funhouse. I’ve found that Christian entertainment (now known as “inspirational” entertainment, in order to not scare away new converts) ranges from the purely ridiculous to the insidiously offensive to tender-hearted treacle. The most memorable kind, though, involves music — and not church music or gospel music, but that oddly all-inclusive label (which defines the artist rather than their music) “Christian contemporary” and (you want hooks? You got ’em) Christian kiddie entertainment.

Thus, in the spirit of the season, I offer six clips from one of the most memorable Christian kiddie creations, The Donut Hole. The Donut Hole series is the brainchild of a gentleman named Rob Evans, who plays the lead role, the “Donut Man” who leads “the Donut Repair Club.” In this group of children and one adult man (think of the original Mousketeers, if Roy or Jimmy really ran the whole show), the assembled group “repairs” donuts by filling their holes with Dunkin’ Munchkins (never named as such, so copyright is leaned on but not violated). Evans reasoning for this odd little bit of really blatant metaphor and almost obscene symbolism? That your heart, without Jesus, has a hole in it. When Christ shows up, our hole is filled. I am not making this up, and the footage below bears me out.

In the process, Evans and his fellow “Donut” producers use bouncy, jumpy, hooky tunes to drive home their point that Christ is, um, er… a hole-filler. The songs cannot be forgotten and haunt me long after I eject the tapes (yes, I’ve only seen these suckers on VHS). Like many things I’ve been proud to present on the Funhouse, The Donut Hole must be seen to be believed. The first clip below sells the concept, the rest were uploaded to show how mind-warpingly catchy the tunes are (and how the Donut Repair kids strut their stuff before and after this odd donut ceremony).

My thanks go out to comic book creator and kitsch connoisseur Bob Fingerman for his recommending Evans’ original mind-warp to me more than a decade ago.

The introduction to the hole-filling concept:

The little black girl in the group leads a rap:

A country-themed “prodigal son” song that goes for a long, long time (at two minutes):

From a later tape: the gang sing and skip and dance and shout “Hallelujah!”:

The Donut Man in drag doing a very “Maxwell’s Silver Hammer”-sounding song. I cut this one down, so you’re missing his Monty Python “pepperpot” impression (believe me, it takes a long while to get to…):

And yet another, pithier explanation of the fill-your-holes-for-Christ concept: