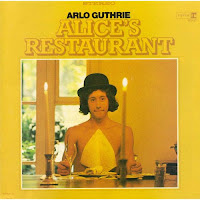 The holidays are a drag all ’round, but there are certain seasonal rituals I heartily endorse, most of them concerning (take a big heaping guess) culture and entertainment. Halloween may be my favorite holiday and Christmas the one that gets the lion’s share of attention, but Thanksgiving has its own pleasant traditions, the foremost mainstream one being, of course, the Macy’s Thanksgiving Day Parade broadcast (if you thought I was going to mention football, ya don’t know me very well). One of the finest musical traditions started back in 1967 when Arlo Guthrie delivered unto us his rambling, shambling, hooky-as-hell narrative entitled “Alice’s Restaurant.” If you get through this holiday without singin’ a bar’a “Alice’s Restaurant” (the next time it comes up here on the guitar), or at least humming the tune, you have had an inferior Turkey Day.

In this era of all music being obtained somehow for free, it’s comforting to know that one can hear Arlo’s once and future bit of anti-war spoken-word brilliance gratis on the Net. It’s been announced that the site below will be streaming the song all day long on Thanksgiving. Just consider the fact that friend Arlo was only 20 when he wrote this ditty, and was already a pretty decent tunesmith (and, I believe, damned good comedian) at that tender age. I have yet to see him perform it in concert (the times I’ve seen him he’s one of several performers and, well, you just can’t dig out that titanic saga in the company of other performers), but it has been a tradition for me to take a listen, in some fashion, to his “Massacree” every Thanksgiving.

Click here for the place where Alice can be heard on Thanksgiving this year
And in case, you want to find out something about the real Alice, who’s still around and now is an artist-illustrator. 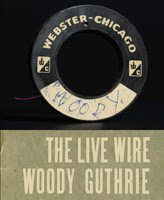 And speaking of the esteemed Guthrie clan, I was very privileged to serve as proofreader for the extremely classy-lookin’ book that is contained within the deluxe release of the CD called The Live Wire. The CD is a rare-as-hell recording of Woody Guthrie performing live at a community center in Newark, NJ back in 1949. It turns out that, right at the dawn of the blacklist era, Woody would take speaking/singing engagements with his wife Marjorie, who would serve as his “interviewer” in between songs. The performance was recorded for posterity by a local NJ ice cream salesman who caught it using a pre-tape form of consumer wire-recording that proves again (see post below) that analog technology ain’t very pretty in terms of its results, but certainly lasts a long, long, long time….

The Live Wire is a fascinating document of the legendary Woody doing what should be a “packaged” show, but breaking out of the constraints of format and structure that Marjorie attempted to impose on the evening. The result is a rather rambling, shambling, but infinitely entertaining (like father, like son) bit of history that includes some amusing monologues by Woody and absolutely gorgeous pieces of songwriting, from Dustbowl ballads to news- and history-generated songs that haven’t aged a bit in the many decades since they were written (“1913 Massacre,” “Goodbye Centralia”). The closer is a beauty, “Jesus Christ,” which alters the old Jesse James ballad to fit the man from Nazareth. My knowledge of Woody before working on this project was confined to the many covers of his work by 1960s folkies I adore and the tunes resurrected by his old travelin’ buddy Pete Seeger (plus the Billy Bragg/Wilco collaborations). It’s quite another matter hearing the man himself, interacting with his wife in a free-wheeling (yes, Bob copped a busload of the attitude here) and sometimes rambunctious Q&A session — I particularly like his asking Marjorie, who has noted she thinks the acoustic guitar is “too loud” for the audience, “do you want me to turn it down?”

As a “consumer guide” service, I note the CD is available exclusively at the Woody Guthrie Foundation website, which has all kinds of interesting info about the man whose “machine” killed fascists.
Posted by Media Funhouse at 5:40 PM