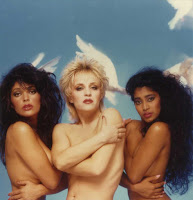 The sudden flood of Prince music onto the hub of modern culture (for better or worse) that is YouTube means that we now have the chance to see him performing live at nearly every stage of his recording career, hear his legally released albums in one (non-Tidal) place, watch his music videos, and listen to what seems like several weeks' worth of unreleased songs (all until his estate is cleared up, at which point his executors have to decide if they want to follow his lead of scrubbing everything of his off of that site).

However, one of the most precious nuggets for those of us who like bad movies has been hiding in plain sight on YouTube on-again and off-again since 2007, and for a full year on Vimeo: the wonderfully awful Apollonia 6 “video album,” which was shot in 1984 but never released.

The approximately 20-minute short film was created as a promotional tool for the trio, which was put together by Prince, who also wrote their songs and produced their sole album. The film, which was titled either “Happy Birthday, Mr. Christian” or “Apollonia 6: the Movie,” was shot but never given a final edit – the online version is missing sound effects, bumper music for the shot transitions, and is clearly a rough cut (replete with dirt on the image).

The fact that it's unfinished and crappy-looking makes the movie even stranger and more awful than it would've been had it been polished and put out on the market. The three “guest stars,” the jarringly Eighties production design, the terrible acting, and the brazenly tacky music videos around which the short is built all add up to a fun viewing experience for connoisseurs of trash cinema. 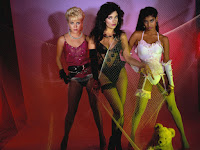 A capsule history of the lead “group”: Apollonia 6 was first Vanity 6, but when Denise “Vanity” Matthews pushed for a higher paycheck as the female lead of Purple Rain, she was fired and Patricia “Apollonia” Kotero was hired to play her part in the film and take over the trio that was, again, a Prince creation – the other two members were his former wardrobe mistress Brenda Bennett and his girlfriend Susan Moonsie.

The ladies’ vocals were beefed up in the production by having the voices of Wendy & Lisa and Jill Jones layered under their vocals. Each of the women was also given a visual “identity”: The lead singer, Apollonia, was a fashion-model-perfect Latina, Brenda was the feisty blonde, and Susan (who had started in Vanity 6 when she was a teenager) played the Lolita figure, replete with a teddy bear.

The most notable thing about the Apollonia 6 album are the songs that Prince earmarked for it, but then pulled. In one case this was for his own benefit (“Take Me With U” wound up on Purple Rain); the other two titles he pulled he then gave to other artists: “Manic Monday” (the Bangles' biggest hit) and “The Beautiful Life” (Sheila E.'s biggest hit).

The only other remnant of the trio is the music-video for their only hit single, “Sex Shooter” (which they also perform in Purple Rain). The video is slick and polished and, well... who cares about that? (Although it is interesting that Prince conceived of women as having the “gun” in this lyric – “c'mon kiss the gun/guaranteed for fun”) 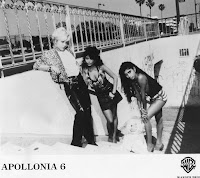 The Apollonia 6 film was directed by Brian Thomson, an Aussie who did the production design for the original productions of The Rocky Horror Show and Jesus Christ Superstar and the very underrated Rocky Horror sequel, Shock Treatment (1981). It was written by Keith Williams, the Welshman who concocted the scenarios for several music-videos, including “Dancin' With Myself,” “Holding Out for a Hero,” “Against All Odds,” “She Works Hard for the Money,” and “Ghostbusters.” (Yes, the terrifying Eighties...)

The “plot” finds our three heroines at a reading of the will of their uncle, who also ran a school for girls. Russ Meyer star (and ex-wife) Edy Williams plays their uncle's assistant, who heads up the meeting. Ricky Nelson plays the uncle, named “Mr. Christian,” in what I firmly believe is a reference to Terry Southern and Mason Hoffenberg's Candy (if Prince loved Barbarella as much as he seemed to, I'm sure he saw the film version of Candy if hadn't read the book).

Christian decided that his nieces need humbling and so he left them nothing. They must go out and get jobs immediately. (Who would've thought we'd hear squeaky-clean TV idol Ricky intone the phrase “tough titty”?) 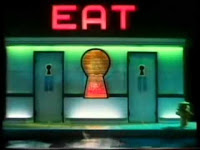 The girls get their first jobs at a diner, where Susan's teddy bear and his friends wear different outfits (don't ask), and Susan sings what might be one of Prince's worst-ever lyrics (“My name is Susan/and I'm oozin'/with desire/for you”). This is followed by a different visualization of “Sex Shooter” that begins and ends in a supermarket, and finds the always-wonderful Buck Henry (!) lusting after Apollonia in what seems to have been some kind of critique of consumerism. (If you've ever wanted to see Buck lip-synching to a woman's voice singing Prince lyrics, this scene is for you.)

Next there's a set-piece at a garage, featuring what might be the best song in the bunch, “Blue Limousine.” And then it's time for Mr. Christian to show up in the flesh – it seems he wasn't dead, he just wanted his nieces to get jobs. The film ends with the promise of a party scene that was apparently never filmed – the screen goes to black for three minutes as we hear the very “Lolita”-ish song “Happy Birthday, Mr. Christian” and miss out on whatever frivolity the filmmakers had in mind for the party.

This lapse into an image-less screen creates for “high”/“low” fanatics like myself an odd little echo of Godard's conclusion for Le Gai Savoir – which also features an equally black screen for several minutes at its end, albeit without the political subtext (then again, Uncle Jean never did a film about a school for naughty girls). 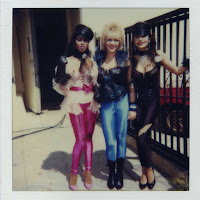 Different Prince-fan sources supply different reasons why the film was never finished and released. One was that Rick Nelson died shortly after the shooting in a plane crash, so the notion of his character also having died cast a pall over an otherwise fun, light project. It has also been stated that Apollonia wanted to keep her acting career in the forefront and wasn't that interested in being a singing star. Perhaps the most likely reason is that Prince simply lost interest in the group (which should be evident by the fact that he gave away two of the most memorable songs that were initially earmarked for their album).

The Eighties were an incredibly tacky period, and Apollonia 6 (which only had three members – do you get it now?) were just a small blip on the radar. Certainly they could've been thrown into a truly kinky scenario if the film was scripted by Stephen Sayadian (aka “Rinse Dream”) and scripted by Jerry Stahl (scripter of Sayadian's Cafe Flesh).

But this is sleaziness in the cause of selling an album, so it couldn't be as challenging (read: good) as Sayadian's work. Instead we just have this amazing cultural artifact that, while not personally made by Prince, wound up becoming an interesting footnote to his checkered list of proteges and odd side-projects.